DINAN SUPERCHARGER (with a built-in DINAN Cold-Air-Intake, Blow-Off-Valve, Intake Manifold & Throttle Body) ~ This is my favorite Dinan Modification. It delivers unparalleled acceleration, every-day drivability and reliability enthusiasts have come to expect from Dinan tuned BMW. My Dinan Supercharged 540i recorded 485 horsepower at the flyhweel (388.0 Rear Wheel Horsepower @ the Rear Wheel on Dyno Jet + 20% Automatic Transmission Power Loss: 388 RWHP divided by 80% = 485 HP) and 421 lb/ft of torque@ the Crank (337 lb/ft @ the Rear Wheel on Dyno Jet + 20% Power Loss:337 lb/ft divided by 80% = 421.25 lb/ft Torque). My 540i accelerates like a Rocket, Period! (Please click on the picture above to see the Dyno Result!)


DINAN ENGINE SOFTWARE DOWNLOAD~ Dinan Software unleashes more power by re-programming the fuel mixture and ignition timing parameters of the engine management system. Furthermore, the software safely raises the factory rev-limit from 6100 to 6400 RPM. A higher rev-limit gives my BMW a broader power band and greater road speed in each gear. But just because I can now out-accelerate other cars, that doesn't mean that I have to pay the penalty of more frequent gas stops. During part throttle or "cruise" conditions, the Dinan software actually improves fuel economy. I noticed that significant power gains were achieved at part throttle, as well as full throttle. That means extra power is available where I spend most of my time driving. The Dinan software also removes my factory governor-limited top speed @ 155MPH and the top speed of my car is estimated @ 190MPH + by Dinan.

DINAN TRANSMISSION DOWNLOAD ~ This is one of my favorite Dinan features. The performance transmission software raises the shift points to a higher RPM, for faster acceleration in both "Sport" & "Economy" modes. This transmission software also provides firmer and quicker shifting, further improving acceleration. In addition, it takes ALL gears to higher RPM (+ 300 ~ 400 RPM) and drags it on while the speedometer quickly accelerates. This transmission software will typically shave 0.1 seconds off of 0-60 mph times and 0.3 seconds to 100 mph. Thanks to this software my gears have show potentials and the car is a bit faster. Simply unbelievable!

DINAN 3.15 LIMITED-SLIP GEAR DIFFERENTIAL ~ This modification improve the entire acceleration aspect by elevating all gear ratio, it feature a shorter final drive ratio. Lower final drive gearing takes advantage of torque multiplication, effectively increasing the amount of torque delivered to the ground by 12% for a much faster acceleration. This modification simply makes EVERY gear usable and it definitely makes the car go faster in 0~60 mph run and quarter mile acceleration (Though the car would loose some theoretical top speed, but it won't matter in my case). After this conversion, my 540i not just take off much faster off the line, this Quaife Limit-Slip-Differential also helps my car to handle much better! Please see "Modifications" for detailed pictures of the 3.15 LSD differential in "Performance & Comparisons".

DINAN FREE-FLOW EXHAUST SYSTEMS (WITH CUSTOM FITTING): Dinan's new Free Flow Exhausts provide 7~15 HP gains without the excessive noise associated with typical "performance" mufflers. The Dinan exhausts feature rigid and durable muffler cases, manufactured from 20 gauge 304-stainless steel for optimum corrosion resistance. Internally, the systems featured Dinan's Tuned Resonance Chamber technology which provides the optimum balance between maximum power gains and a civilized, yet SPORTY EXHAUST NOTE. The Dinan exhausts also provide substantial weight reduction compared to the stock mufflers. The 540 system weighs in at 18.5 lbs. vs. 34 lbs. The dual 3 inch diameter polished stainless steel exhaust tips have been designed to be visible on the 540i, giving my car a tasteful performance look and the power. DINAN EXHAUST CUSTOM FITTING: The Dinan exhaust is designed to fit on a standard 5-Series without further bumper modifications. I didn't want to loose the look of "Cleanness" of the original 5-Series by adding an after-market rear skirt. So I inquire my body shop to custom cut a valence and repaint the entire rear bumper; then I request my muffler shop to rise the Dinan exhaust more than 2 inches (this process involved many hours of research). The result? The hard work finally paid off!

Please click HERE TO SEE THE BEFORE & AFTER PICTURE OF THE CUSTOM FITTING OF MY DINAN EXHAUST.

DINAN BADGE ~ Dinan is very strict in giving out badges, they insist their customers to earn at least 10 Dinan points in order to get the badge. I currently have 32 DINAN points. I'm proud to say that I'm one of the few E39 540i owner in the state of California , or even in the United States to get this Badge!! (Please Check out the DINAN Badge in the "MODIFICATION" or "PERSONAL GALLERY" Section.) 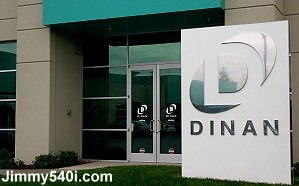 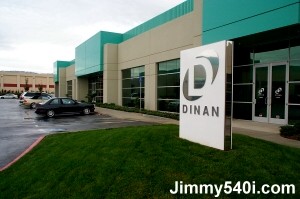 DINAN 850CSI IN THE SHOWROOM 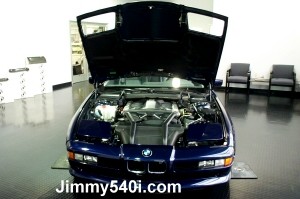 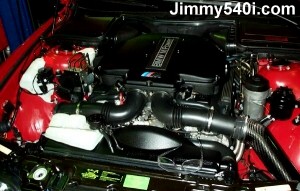 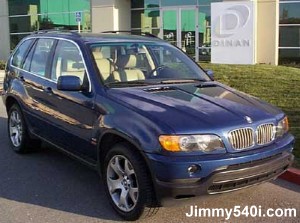 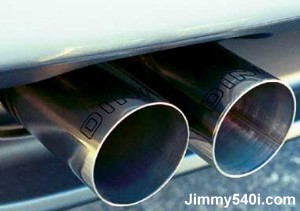 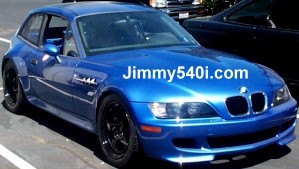 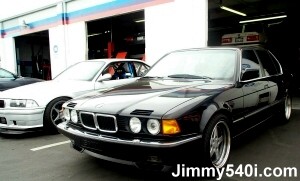 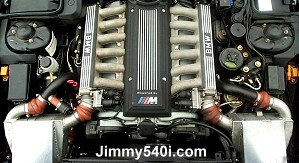 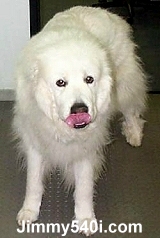